Alaska’s “Open for Business” and It Sounds Like a Warzone

I’m watching my brother’s place in Homer, Alaska for a month. Just me, a dog, a cat, two chickens, and the occasional moose. The rental property, made up of three separate units, is connected by wooden boardwalks and snugly nested on a bluff overlooking Cook Inlet. I’m staying in the guesthouse, while Nobody the cat and Benny the dog have free rein over the main cabin. I’d enforce my human superiority over the pets, claiming the cabin as my rightful domain, but Nobody’s ubiquitous fur is anathema to my asthma.

A feeble superiority, humanity’s; really more of a complex.

View from the guesthouse.

I wake up each morning, strap boots to frigid feet, and step outside to a sublime Alaskan panorama. Glacier-covered stratovolcanoes jut out over the horizon, capping the expansive saltwater basin. A telescope propped up near the window takes aim at Mount Iliamna. I peer through the lens with one eye, arrested by the towering goliath’s reciprocal gaze. Iliamna’s peak is nearly forty miles West from me, yet the scope captures only half of its icy, rugged profile.

Losing the staring contest, I find my footing by studying the boats peppered across the sea. Among the usual smaller vessels carrying tourists and halibut fisherfolks, a large ship cuts through the inlet at a sluggish pace. I lower the telescope and fix in on it. Bold, white letters,“Polarcus,” span across a Sustainability-Green painted starboard. Sustainability Green is the choice branding color for environmental nonprofits and oil and gas extraction companies, alike. In this case, Polarcus falls under the latter category.

In late July of 2019, the Trump administration gave clearance to a Texas-based oil and gas company, Hilcorp Energy, to begin exploring the Lower Cook Inlet for extractable fossil fuels deep in the basin’s sedimentary rock layers. “Exploring” in this sense refers to perpetual seismic airgun blasting, emitting 2,000 psi shockwaves that not only detect sub-surface geological features, like the presence of oil and gas reservoirs, but also agitate and even kill swathes of keystone species, like zooplankton.

Now, I’m an avid fan of the natural world and its immense beauty. Its seeming indifference to our miniscule meanderings is humbling. Efforts to extract natural resources, destroying habitats and sacrificing countless inhabitants at the sacred altar of energy, are bad and we should all feel badly that they’re continuing.

But at this ecological clusterfuck’s core, a slew of wealthy people—mainly corporations and politicians—trudge unscathed through public ridicule and outrage. Indeed, it appears they’re gaining momentum and operating with an impunity matched only by Mother Nature’s own aforementioned indifference. This is more than a matter of ecological destruction; it is class conflict writ large.

That ship out there—with its strategically crafted color design and fourteen mounted air guns—is part of a corporate regime bent on securing profits at irreparable costs to the environment and the working class people who depend on well-established local economies. Its explosive seismic ammunitions render the ocean’s subsurface an aural warzone, driving aquatic life into nonexistence. Economic and social fallouts of this offensive will undoubtedly manifest first in the fishing and tourism industry. 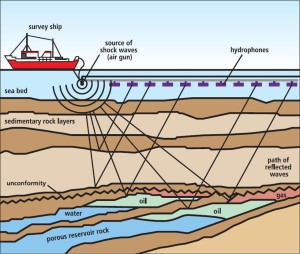 Holding powerful actors accountable for their conduct and scrutinizing their policies and investments are important endeavors. Organized efforts from groups like Cook Inletkeeper and Our Children’s Trust (OTT) represent solid steps in this direction. But even with Alaska Supreme Court’s ear at the October 10th Sinnok v. Alaska hearing, the kids from OTT received a mere shrug and a pat on the head. The courts, the story goes, “cannot decide whether the State’s energy policy is constitutionally permissible.”

It is increasingly clear that a broader working class campaign, spanning beyond state borders, remains the sole panacea to unfettered profiteering and its cast of characters. The power of working people lies in their sheer numbers and their convenient positioning at the heart of economic production.

How do you get a state and an industry to hear you? Not by way of deafening seismic shockwaves—that’s proven to be cruel and unusual. You remind them that you’re the reason they exist in the first place. Without your labor, and “you” are the majority, they cease to exist.

This is the first installation of a multi-part series delving into the murky waters covering Alaska’s energy disputes—the central policies, key players, and avenues of bottom-up political organization. Until the next edition, I gotta go feed the pets (read: overlords).